I woke up and arose super early this morning (4:30) and since I was awake, decided to go ahead and get up, meditate and start writing.  I cranked out two fairly intense chapters over the next three hours then laid back down again.  The internet was down most of the day here while they replaced the modem so I decided it would be the perfect day to take myself out to see the film Cake. 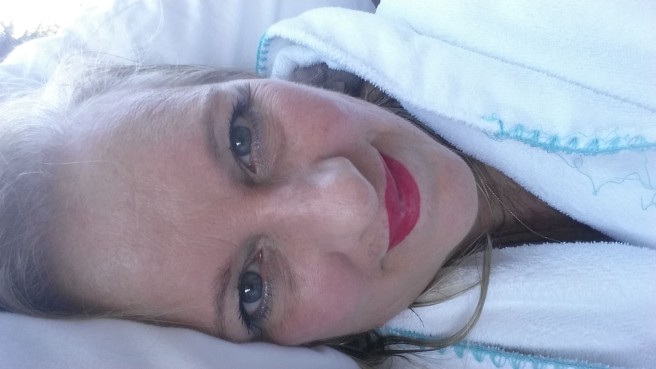 I have to get dressed and put on makeup and take myself out of here from time to time.  It’s just smart as much as I absolutely adore my cozy little nest.

I have so much to say about that film but it wiped me out so much that I will write about it another time.  It touched on so many topics that have touched my life both as a therapist and human being–loss, trauma, PTSD, chronic pain.  Jennifer Aniston was absolutely amazing and if she doesn’t win the Oscar for that role it will be a crime.  One scene in particular threw me in to instant tears.  The last scene made me gasp out loud.  I highly recommend this movie although it is not an easy watch.  I was captivated through the entire thing.

I’ll end with a little sharing from my writing this morning.  It was mostly about the trauma angle of our childhood so this was just a heavy day.  I feel tired tonite but in a deep way fed.  I don’t know how else to explain it.

Here’s from early this morning:

I flew like a swearing tornado down those steep stairs in to the living room and descended in to a scene you might see in a Norman Rockwell painting.  Two elderly people, sitting quietly in arm chairs reading–one of them, a strict Baptist, literally reading the Bible; Marj’s parents.
I was wild and out of control. Screaming, swearing, crying, my hair flying from the attack, my cheeks flushed with defensiveness and shock and bruises already forming under my shirt and shorts invisible to anyone else.
Marj, pushed her off button, gathered herself in to her normal state of stiff compose and walked quietly down the stairs behind me, landed at the bottom and shrugged to her parents with a comment like “see what I have to put up with?”.