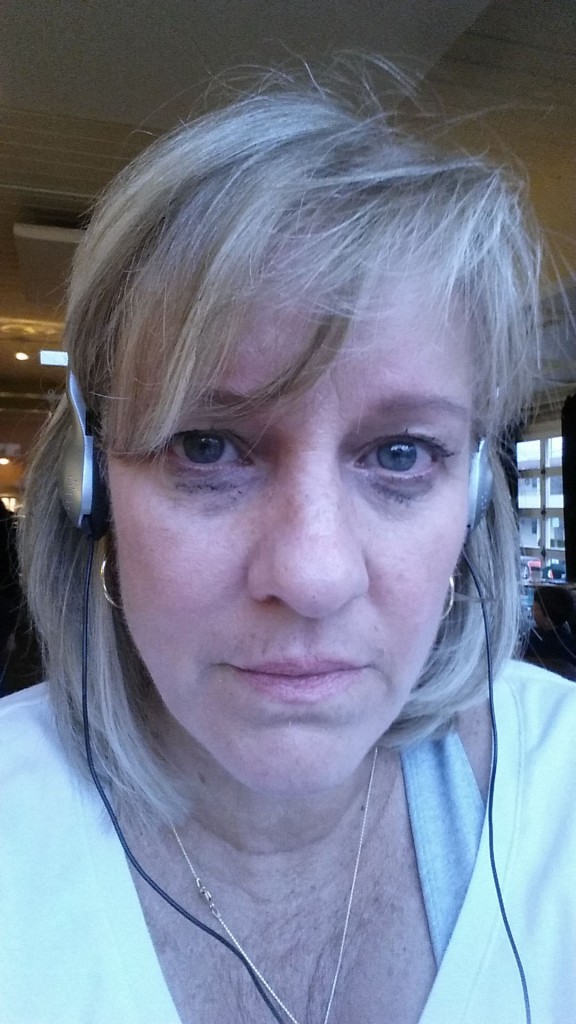 What would you think if you saw a woman sitting high on a barstool in front of her laptop in a coffee shop, staring out the window up at the sky wearing her headphones and tears streaming down her face, shoulders shaking, sobbing?

I’d probably write a story in my head about that scene.  I wonder if any writers are around me right now. 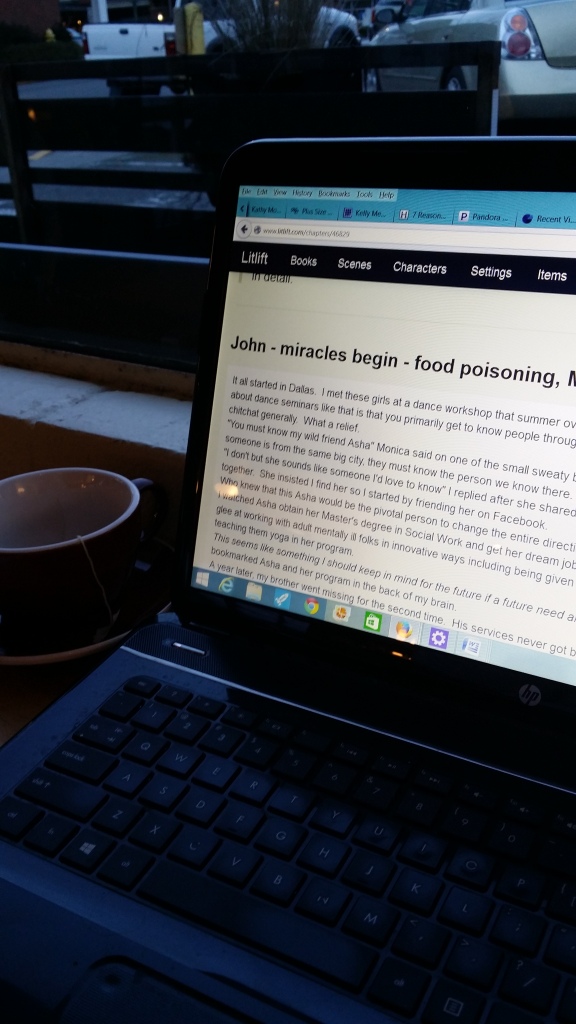 I completed my 30th chapter here in the Walnut St. Coffee Shop here in Edmonds.  I’d been wanting to get here for the entire 3 plus weeks I’ve been here but was just sequestered in my cozy nest.  I can kind of see why I waited because it’s way more stim here. 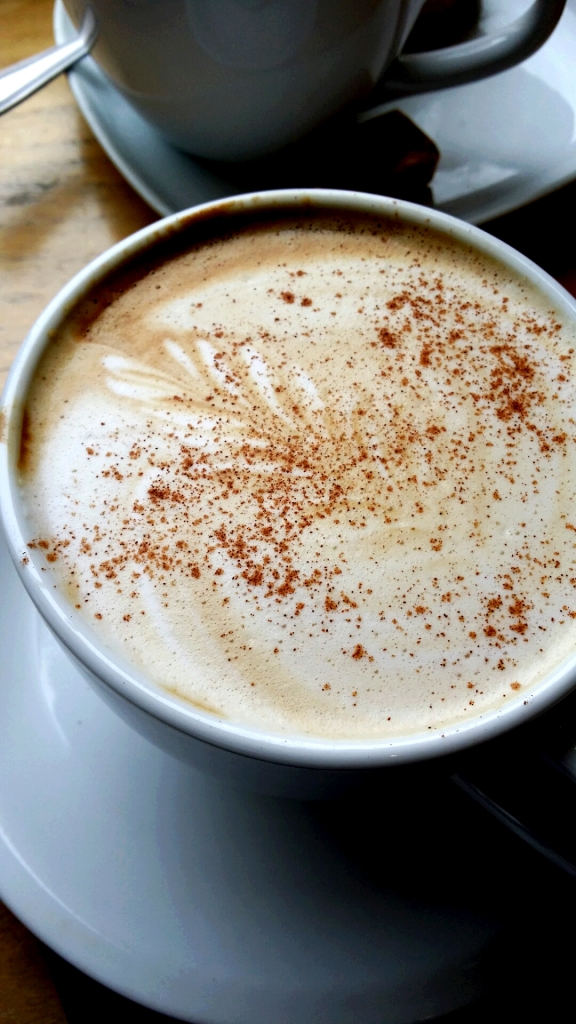 I decided to write the biggest miracle story I have about my dear brother as it’s committed to memory and I don’t need to dig too hard for it.  Plus it’s a happy story to write in public.

I counted chapters and realized it was a milestone–30!  Yay! 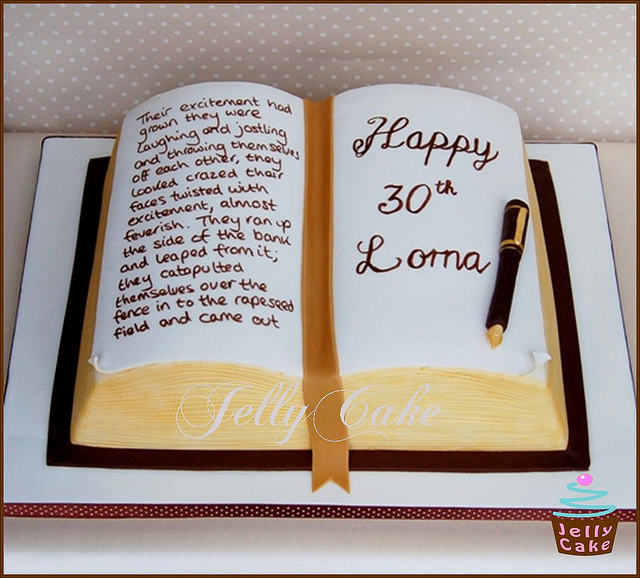 (thanks Lorna for letting me borrow your cake)

After I finished I decided to change my Pandora station in celebration.  I’ve been listening exclusively to my Pat Metheny/Lyle Mays station for all of my writing and when I say all I mean every last word.  I should owe them some royalties or something because they’ve provided my inspiration, my comfort, my muse.

Music was a big part of my relationship with Cindy so I intentionally have avoided any songs that would take me in to that deep raw space music is so famous for.  I just didn’t want to overload myself with triggers.  She used to tease me saying “KT loves that jazz jazz jazz” whenever she’d come over and I’d have my smooth jazz tunes on.  She’d walk in the door and say in this funny accent “jazz jazz jazz” every time.  She was more of a rock n roll, contemporary top 40 gal.  Well, we were when we were together.  We had lots of soundtracks.

I closed out my chapter then turned on Todd and landed right in to this song.

I immediately burst in to uncontrollable tears right here in the coffee shop.  I listened to the entire song and just bawled.  I looked up at the sky and said to myself “drink in this moment right now…the whole moment…because Cindy is here right now”.  This song figures prominently in my book and was the one I played at her Memorial service transcribing the lyrics in to the program.

And of course Cindy was 30 when she was killed, a fact I didn’t even consider with my 30 chapter celebration.

Happy tears.  What a celebration.  I’ve wondered why I’ve felt so not alone these three weeks of writing. She’s been with me the whole time. 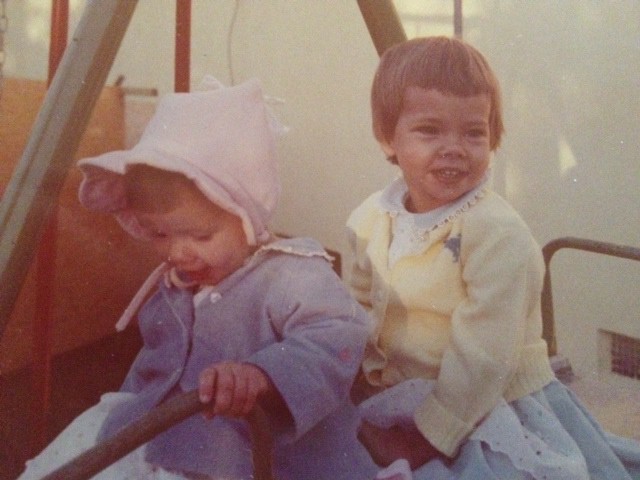 Here is a snippet of my chapter and I’m done writing for today.

This time he was missing for about a week when he was found holed up in a cheap motel in Indianapolis.  He spent his 50th birthday in that motel.  He was sick enough to be on his wild ride but thankfully well enough, somewhere inside that fractured brain of his, to reach out to our father.
Dad drove over to pick him up that day and said he was “variable” on the ride back–at times coherent and at times belligerent.  He dropped John off at his apartment then went back to the friend’s home where he was staying.
Bad idea I thought as I was at home, stuck in bed recovering from food poisoning that week.
Within hours John’s neighbor, in possession of my Dad’s phone number, called him to say John was out in the parking lot of the complex yelling and being generally unruly.  Someone, maybe the neighbor, called the cops who arrived before my father and later conveyed that John was taunting them to shoot him.  The fact that they talked my 6 foot 1, 350 pound brother down and took him to the hospital vs doing just that is just one of many miracles that have followed him throughout his life.

My man comes tomorrow so need to get some things done.  What a life I tell you, what an amazing Grace filled life I’m living.

I have no words and for me, that’s saying something.