Yesterday, I spent most of my day on two chapters while crafting how to tie this story together in the most legible yet intriguing way.

I also ran in to a website to help me with my grammar and punctuation. 😉

Today I head out to lunch with a friend I know up here then I’m basically holed up in the Studio for the remainder of the week, digging in and getting as much done as I can. 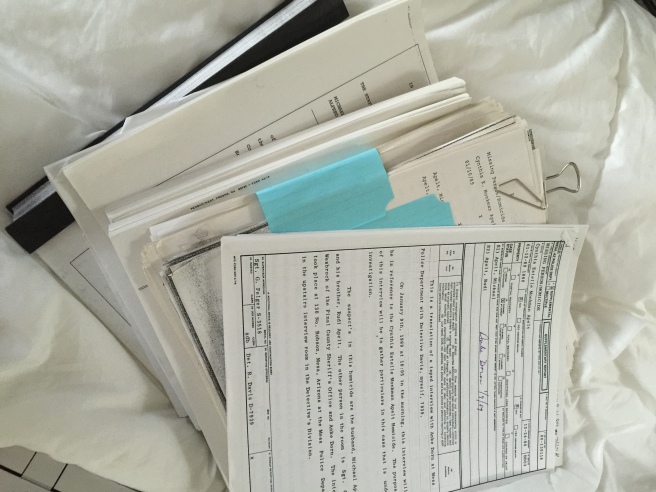 My task today is to focus on Anke Dorn. I have so many interviews with her, testimony and strange letters she was writing to various people. I have mixed feelings about her–had she not sung like a canary, the brothers could have gotten away with murder. Yet, she was living in my sister’s house, pawning her jewelry and she was present when they murdered her. I don’t think she’s evil on her own and has likely never committed a crime on her own since then. Yet I do hope she’s haunted by this event and has learned something from it.

I bought myself a beautiful flower bouquet from Trader Joe’s yesterday along with rations for the week so I don’t have to leave. It’s crunch time!

A snippet from yesterday:

She delivered her opening statement in true Cathy Hughes style with a soft demeanor and clear, organized, detailed information. The jurors hung on her every word.
She began using Michael’s own words from the bizarre message they’d crafted in poorly translated English on Cindy’s answering machine, although the Jury didn’t know this yet.
“Ladies and Gentlemen of the Jury, hear what I have to talk. I’m going to tell you about the death of Cynthia Estelle Monkman Apelt. She died on December 23rd, 1988, just two days before Christmas.
She was murdered. She was murdered just one day after a $300,000 life insurance policy insuring her life became effective and just one day after another separate, additional $100,000 life insurance police was delivered to her home.
She was murdered just one day before she was doing to fly to Illinois to spend Christmas with her family. It was also her intent during that trip to discuss the insurance policies with her father.
She was murdered by this man who is sitting right here with earphones on. His name is Michael Apelt.”

I could have copied and pasted Cathy’s opening statement and called it a Chapter, it’s that good. But this is a memoir so I pulled the best segments I could find, which was not easy.

She was a sight to behold. I’ve never seen or heard a prosecutor like her and we were so lucky to get her. You will learn much more about Cathy Hughes in the book.

3 thoughts on “dark and light”