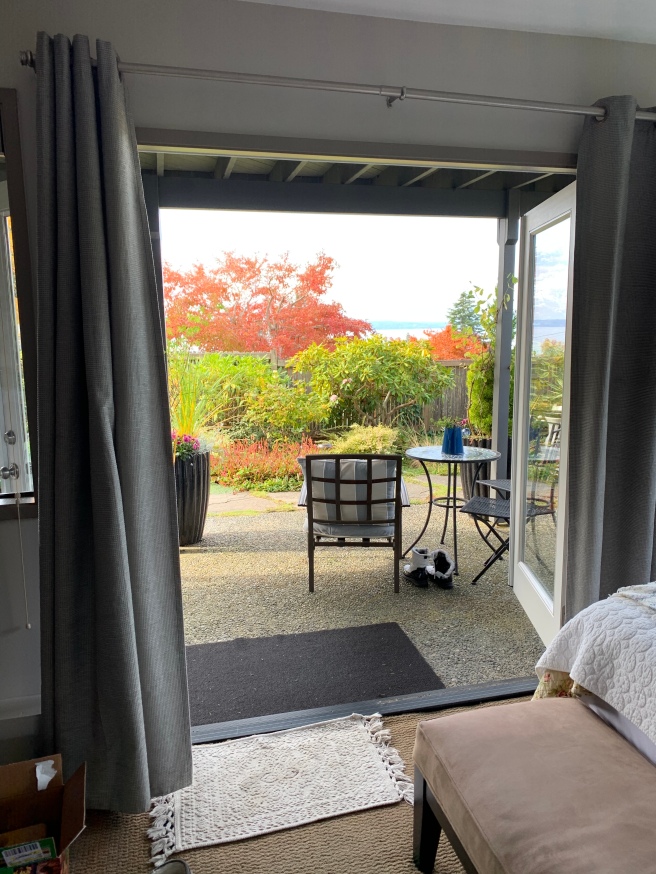 It’s Monday and I’m up early and getting to it! I just have four more writing days while here in Edmonds, so I’m going to make the best of them. I had a little fun last week and over the weekend, so time to buckle down. I read through almost all of my chapters yesterday, editing and making notes and I like how things are coming along. I just have a very few chapters left to write, and I’ll complete one of those today.

Not gonna lie, I’m already dreaming about my next trip here. I just love it so much. 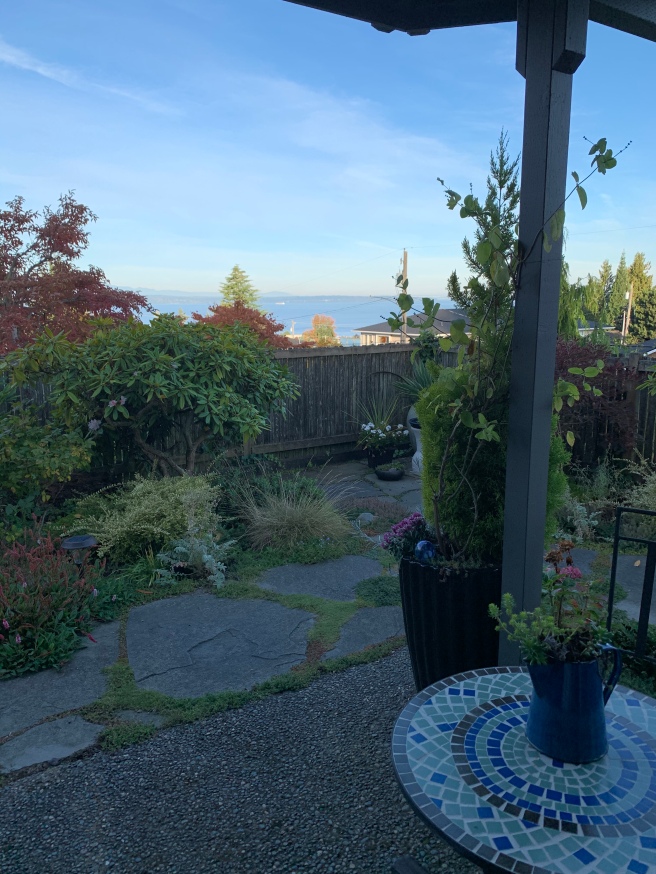 So to follow up with where I left off last time–the fantastic flower class I got in off the waiting list!

I always do my research, or at least as much as I can, before venturing solo in to a new neighborhood to see what I might not want to miss.  The London Plane is in the Pioneer Square area of Seattle which is kind of between the train station and the happenin area of Pike Market. There are new places popping up around there, so I decided to go early to check out a local happy hour, have dinner and plenty of time to find parking. 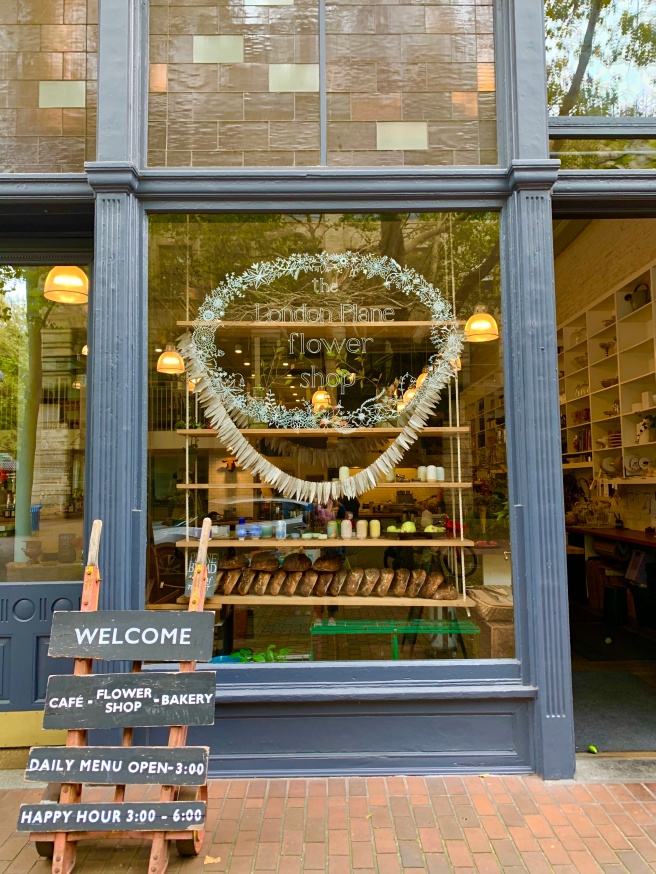 Well, had no idea the traffic going IN to the city on a Thursday afternoon would be so brutal. It took me over an hour to get there and another 20 min or so of roaming looking for parking, so the happy hour I’d planned at a place I’d scoped called Good Bar was out. I squeaked in just in time for the class.

It was amazing. First there was a bar of really nice snacks, which was nice because I had been fasting all day (I’m doing Intermittent Fasting now). They had three selections of wine and delicious cheeseboard type of nibbles.

There were buckets and buckets of flowers, branches, berries, fruits etc. all around the tables that were preset with artisan vases and clippers (that we got to keep!) at each spot.  I switched out the vase at my spot for a white and blue striped pottery vase.

The women hosting the event were both the owner of The London Plane and a local floral artist. I gleaned so much from just listening to them and watching. The LP is a unique concept which houses a flower shop/wine bar/coffee shop/pastry shop/cafe/boutique with handmade items for sale. It’s like everything I love under one really open and charming roof. I loved it and would totally hang out there if I lived in the area.

We got some intros to the flowers and their backgrounds, while the Jeni the floral artist created an arrangement as a demo.

They then basically set us free to choose what we wanted of probably 50 different varieties of the above options and we all spread out and went to town. I dumped my entire arrangement about half way through and started over…arrgh. I’m still very much in a learning curve. By the end, I was really happy with what I made. They also gave us boxes filled with tissue to easily cart them home (great idea). I learned very much about the direction of my new business and where I want to take it (and myself) in the coming year.

I am really interested in developing my skills as an artist and have decided to break out my easel (well get a new one as mine was lost in the flood) and get to painting again.

Oh! Almost forgot. Pat, my host here, had told me that day that she was planning on taking out her dying fig tree the next morning, asking me to park my car elsewhere to make space for that project. Well….I got a wild hair. I asked the London Plane owner if they might like the dozens of green figs/ branches/ leaves that would be coming off and discarded and she said yes! She offered Pat a $50 gift certificate for her fig remnants which was perfect as I really wanted Pat to get down there to check out the place–it’s totally her, as well.

So the next morning, I pruned that tree to an inch of its life and stuffed my car with figs and branches and toted them back down to the shop. It was a great caper, got me outside and a little bit of gardening as I miss my own garden so much! 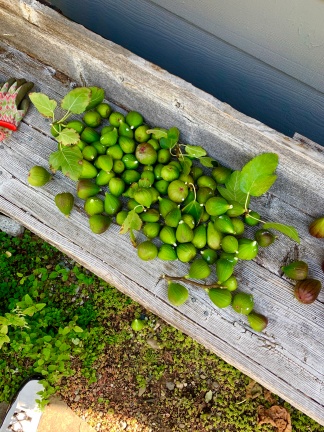 After the class, I walked with my arrangement back to my car, kind of hungry still so thought about where I might grab a bite back in Edmonds. The neighborhood felt very different at night, so not a place I’d venture out on my own. As I sat in my car, checking my phone for directions, I glanced up and right across the street, just steps from my car was something that looked familiar. It was the exact type of font as the Good Bar lounge I had been researching earlier and lo and behold there it was! Literally in front of my face!

Well, that was a no brainer. Popped right back out of the car and walked across the narrow street and right in to this very cool spot in an old bank. The vault is still there even!

I ordered myself a cocktail and perused the menu. I had read one review where the man said he rarely would go to a swanky bar like that, but the sloppy joe was so beyond, he kept going back just for that. So, that’s what I got. 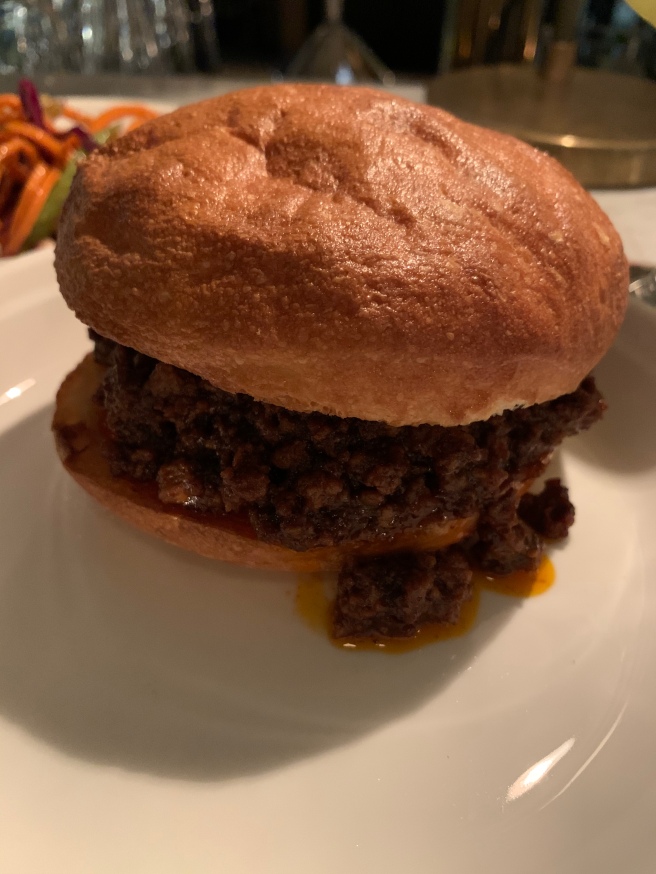 I was looking around with this goofy smile on my face, which caught the attention of the owner across the room and she mouthed “do you need anything?”. I motioned her over because I wanted to share with her good fortune in finding her place.

Well, we ended up talking and talking as she joined me multiple times as I enjoyed my cocktail, a “not cocktail” later as I was driving, my sloppy joe and then she comp’d me this delicious “Swiss Miss” ice cream that tasted just like hot chocolate, but frozen. Complete with mini marshmallows! Thank you Nancy!

I’ve found that when I travel alone, I often feel less alone because I’m more approachable and meet more people. Always sit at the bar is my motto.

I’ll end this with a snippet that I edited yesterday. Coming in to the home stretch. Once I get home, I’ll spend time getting back with the agents who expressed interest and likely reach out to new ones. True crime is at a high now, so I think my options are much better than even when I started this four years ago.

It was all very robotic and infused with denial. I just kept reinforcing the story in my head—that Cindy had gotten a call from Mark, that he was in the parking lot of her apartment, threatening to come to the door, so she ran out to head him off at the pass. He was the “angry man” Michael was referring to. The only person she would run off like that to. Then the two of them went somewhere and were holed up in a hotel or something. This was the only story I could allow myself and I was holding on to it for dear life.

Meanwhile, the Mesa police were making the off-policy decision to forego their policy of waiting twenty-four hours to declare Cindy an official missing person. Maybe it was the fact it was Christmas Eve, maybe it was the life insurance I mentioned, or Michael’s strange drunken story that didn’t make sense. But the police declared Cindy officially missing by 6:00 that morning, just three hours after they had been contacted. And they sent a report to the media. The people of Phoenix were waking up on Christmas Eve morning to my sister’s face on their screens, declared “missing”.

With my permission, my friend Debbie had a key to my house and let the police in. They retrieved the note I left and Cindy’s airplane ticket.

Then they went looking for Mark Maurer.