I worked all day on writing and organizing chapters. I finished one entirely that was kind of a breath of fresh air, as it was more about the rising out of the mire, than the quicksand of Cindy’s murder, the investigation and trial.

I treated myself in the evening to a dinner at a restaurant not too far away called Mkt. One of the ladies at the flower class had recommended t, and boy was she right. I had just a wonderful time there.

snapped a couple of pics of myself before I went out to document my attempt at using the curling iron on my new haircut–I look so relaxed, and was–my skin is also really improving with the fasting lifestyle–can you believe I turn 60 in two weeks?

I’ve done quite a bit of solo travel and one thing I’ve learned that works really well for me is to eat at the bar. Whether it’s a sushi bar or in this case “chef’s table” which was a five seater bar overlooking the cooking and prep area. It makes you feel part of things sitting there.

I had a gorgeous glass of Sangiovese and these incredible grilled green beans with lemon, then their ahi crudo and my third course was a burratta salad. I topped it off with a lime coconut sorbet with shortbread cookies for dessert. I did indulge and had the stomach ache later to prove it, but it was worth it. I just can’t eat as much as I used to now that I started Intermittent Fasting…dammit. 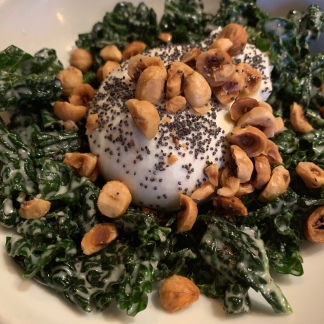 On the way home, these two bugs were mating on my windshield, literally the entire drive home, including on the freeway. They were serious about it.

Been writing off and on all day. I also planned my next trip to come back in three weeks. Long story, but she got a cancellation, I needed to spend some money on the airline before the year was out and I’m riding a wave of momentum right now. Plus I need to get some more documents that are packed up in our garage at the moment.

Today was one of those days that I had my jammies on at 3pm. I was sitting on my perch–the fold out sofa in the studio–and there was a knock on the door.

My sweet husband sent me a gorgeous dozen roses to enjoy for my last days here. He’s so sweet and thoughtful.

Well, here is a snippet of a chapter on Michael Apelt’s sentencing that I worked on some today. Still pretty raw, but it’s on paper.

Topped off with my two views–to my front and to my left. I’m sure you can see why I have such a hard time staying away from this paradise.

I sat with my family and Janine in our regular spots–the second row on the right side behind the prosecution.  There were more press in the gallery that day than on other days. The Death Penalty tends to draw that.

I had a perfect view of Michael as they brought him in, clad in the jail’s orange jumpsuit, socks with plastic sandals and shackles–both wrist and ankle—with chains.  It was the first time I had seen him like that, ever.  In the trial, he was always restrained beneath his casual slacks.

I watched him, knowing this was likely the last time I would ever lay eyes on Michael Apelt.  I witnessed him awkwardly sit down.  I watched his always-present interpreter hand him the headphones he wore daily in court.  I saw him pick them up with his manacled hands, clanging, and restrained together at the wrist.

What happened next, is one of those moments you will never quite catch the essence of, in either telling it, much less writing it.  It was a miracle of sorts that occurred in my heart that day.

It was as if the environment around Michael Apelt both paused and went black and white, like a scene you’d see in a movie. He became like some sort of spotlighted hologram, and he was the only thing moving in the room, but in slow motion. The air around me shifted to a stillness the courtroom had never held before. It was as if I could hear his every move, amplified in my mind.

One thought on “rising”